Our holistic approach to working with dogs can resolve some of the most challenging and puzzling behaviors.

Twenty-five years of combined professional experience with dogs, in addition to our vast web of local and national colleagues, equips us to help even the most complicated dogs, and their humans, achieve an improved quality of life.

Sensitive Dog was founded in 2004, in Seattle, by Julie Forbes. The inspiration for the business name came from Julie’s experience of dogs being very sensitive, in general. There are relative degrees of variation between individuals, of course, but the point is that we know all dogs to be perceptive, keenly aware, and tuned-in to their environment and family. A lot of people resonate with our name, and say, “My dog is sensitive!” Our vast experience is that in reality: All dogs are sensitive.

We look at all of our clients through a full-spectrum lens. Nutrition, stress, medical issues, learning differences and genetics are all factors that can impact your dog’s behavior – and we look at them all, ALWAYS. We treat our training dogs like family while they are here and have enjoyed long-term relationships with many of our clients, after their program is complete.

The three most fundamental components of your dog are: his/her Biology, Environment, and Psychology. One of the most common reasons dogs do not experience lasting change through traditional training modalities, is because traditional training concentrates exclusively on the psychology of the dog.

Darcie and Julie were married in 2012, and joined forces professionally in 2016, transformed their Seattle home into an Urban Farm, and are helping people and their dogs both locally, and nationally.

In addition to their shared love of dogs, the couple cherishes their loved ones, and enjoy traveling, cooking, comedy, farm-to-table restaurants. Julie is the founder of Sensitive Dog and has been working with dog behavior and training for almost twenty years. Julie specializes in evaluating dog behavior, coaching the human-dog dynamic, and teaching people how to communicate with, and understand, their dogs.

Julie Forbes is the founder of Sensitive Dog and has been working with dog behavior and training for almost twenty years. Born and raised in Massachusetts, Julie earned a bachelor’s degree in Animal Science from the University of Vermont and completed the Academy of Canine Behavior’s apprentice program in dog behavior and training, after she moved to Seattle in 2001.

Julie’s gift of communication led her to develop The Dog Show with Julie Forbes, a live radio show, and iTunes podcast, that has welcomed some of the most well known names in the world of dogs. Her national reputation as a skilled interviewer has attracted guests including Dr. Temple Grandin, Dr. Patricia McConnell, Dr. Alexandra Horowitz, Dr. Michael Fox, Dr. Brian Hare, and many more!

Julie has appeared in a national Subaru commercial, on Evening Magazine in Western Washington, and on Q13 Fox as a dog behavior expert.

Julie specializes in evaluating dog behavior, coaching the human-dog dynamic, and teaching people how to communicate with, and understand, their dogs.

An avid dancer, and generally physical person, Julie brings experience and awareness to our own bodies and how we can use them to communicate with our non-verbal four-legged family members. Julie is passionate about empowering people, connecting individuals to their authenticity, and bringing ease to the human-dog relationship.

From grief around the death of a beloved dog, to dogs’ incredible sense of smell, to how dogs help us learn to be present; Julie has talked about it all. Julie loves her dogs and animals, her wife and family, music, dancing, food, public speaking and getting to know people, both socially and professionally.

Like most dogs, Julie wants to be having fun, all the time. Darcie’s sensitivity to animals’ experiences, paired with her passion for knowledge, helps us to work with some of the most difficult challenges that no one else has been able to address effectively. A powerful advocate, Darcie will focus with you and your existing team to get to the bottom of even the most perplexing behaviors.

Darcie’s sensitivity to animals’ experiences, paired with her passion for knowledge, helps us to work with some of the most difficult challenges that no one else has been able to address effectively. A powerful advocate, Darcie will focus with you and your existing team to get to the bottom of even the most perplexing behaviors.

Darcie’s intuition, sensitivity, and passion weaves together with her knowledge of psychology, psychophysiology, and psychopharmacology; powerfully connecting her, with you and your dog.

Darcie’s many years as a leading expert in the assistance dog industry gives her a unique skillset that she brings to her work with dogs. Not only is she incredibly creative with training from her years teaching dogs all sorts of tasks like turning on/off lights and picking up keys, but she is also extremely discerning and protective of the emotional well-being of working dogs. She intimately understands the connection between emotional experience and thought process and is an empathic laser when it comes to reading animal’s state of being.

Darcie loves her animal family, her sisters and her urban farm. She is happiest when working with one of her dogs, hanging out with her goats, and working around the property. Whether you hear Tupac, or Johnny Cash, the music coming from somewhere on the farm is a sign that Darcie is in her happy place. She enjoys being active outdoors and is an indoor cycling enthusiast. SoulCycle and Flywheel are two of her favorite spots! Darcie also enjoys cooking healthy meals for the people and dogs she loves. She also loves reading, listening to podcasts and audiobooks, and watching TED Talks. 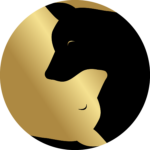